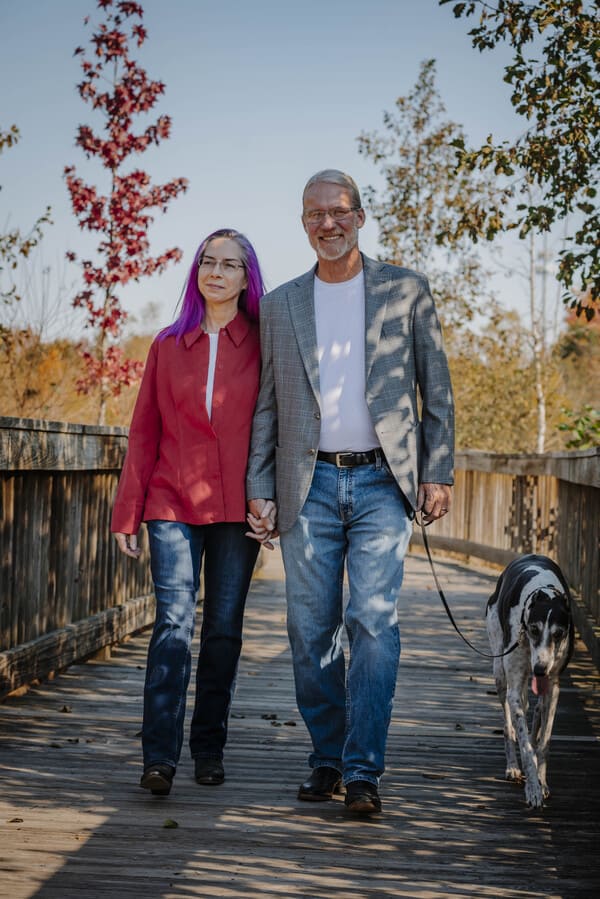 The OmFLOAT story begins in 2004 when Brooks and Amy Brinson purchased their first float tank, the seed of their business (Tank Room 2 today).

The two were living in Dallas, Texas and Brooks was seeking reprieve from the
symptoms of “busy mind meets modern day society”. His high-stress managerial role in construction brought anxiety, agitation in crowds and an unfocused mind. Amy’s profession was in clerical support, and she felt desk-related pain like tension in her back, shoulders and neck.

“Floating,” an emerging practice at the time, was known to support the three facets of the human experience; mind, body, and soul; and it had come to the attention of Brooks. Unfortunately, the closest center at that time was thirteen hours away.

With skills in construction and a tank for sale near him, Brooks bought a Samadhi tank for his personal use. Amy noticed the positive effects on Brooks and also began floating - they both fell in love with the experience. Not only that, they discovered a rich pool of wisdom in the float therapy community for its emphasis on healing and self-discovery.

In 2012, Amy’s profession brought the couple to Northern Virginia. While they fell in love with their new home, a need for floatation in their lives returned - but with more intensity. They set up their tank on its own floor and posted the tank available to guests online. Their first visitor was a Marine from Quantico.

Brooks and Amy came to appreciate the unique and reliable effects of the isolation tank on special populations like veterans and trauma survivors who came from many walks of life. Additionally, guests on a spiritual quest and interested in improving their meditation practice were engaging in colorful dialogues and experiencing life-altering benefits, too.

The positive response from the surrounding community was overwhelming. Visitor by visitor, Brooks and Amy would witness complete transformation - sometimes in a single session with a guest and sometimes over time. The work with the community became a priority to them and led to their eventual transition to Brinson Life Services LLC, the parent to OmFLOAT, and the Brinson’s outreach in the alternative medicine community began.

In March of 2016, OmFLOAT opened in Ashburn, Virginia and has remained true to the spirit of its initiation ever since. The center now features five elegant and private rooms with Samadhi tanks, two meditation areas with custom visual and audio experiences, and a Clearlight Sanctuary 2 Infrared Sauna.

“OmFLOAT is more than a passion or just a business – it’s our life, our home, our family.
We hope it means as much to you as it does to us.” 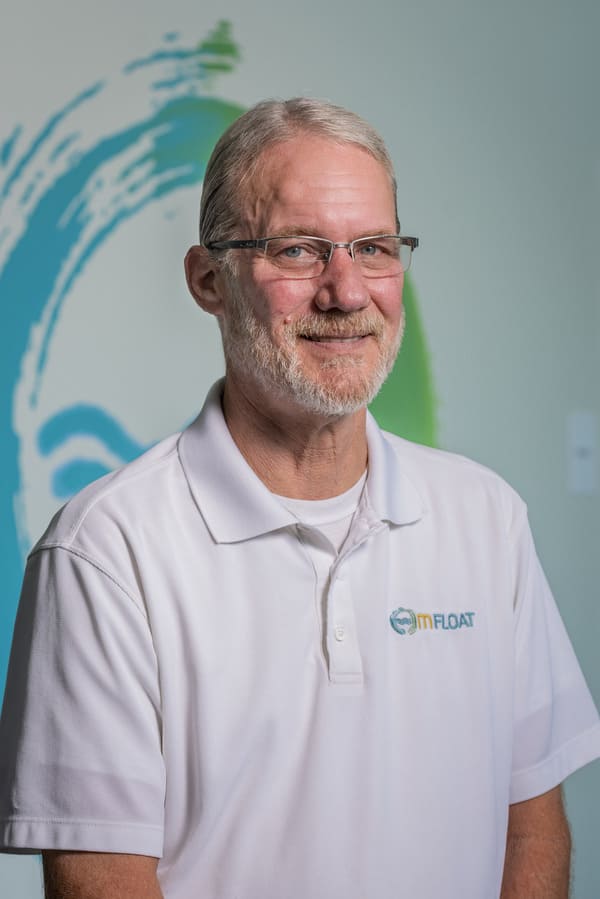 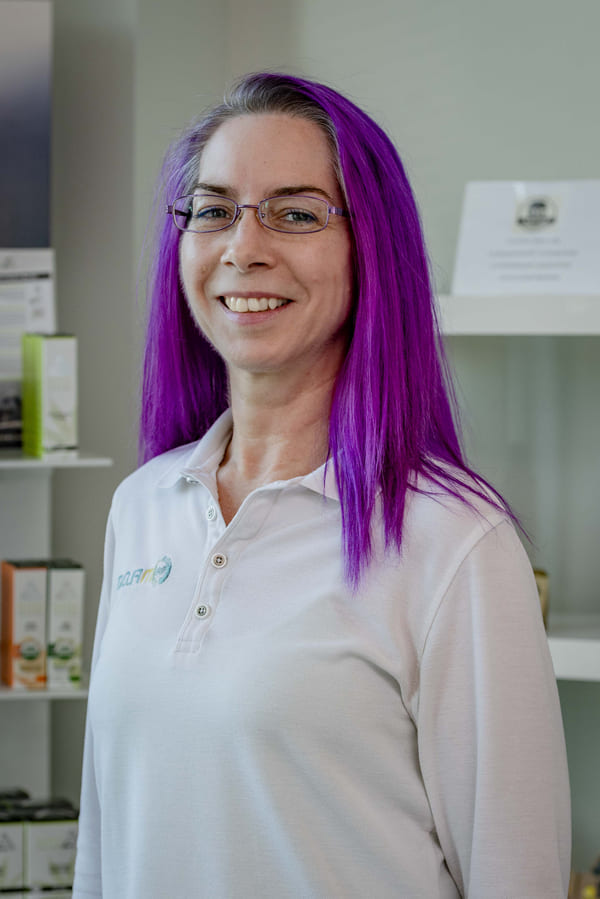 Brooks and Amy, who founded OmFLOAT, are avid meditators and travelers of the
physio-emotional landscape. Their background in Olympic precision shooting, spiritual
pursuit and a constant quest to become better on a daily basis have contributed to their
individual outlooks on life. Amy is centered in the present moment and believes this to
be the gateway to liberation. Brooks sees life as an opportunity to “Wake Up!” and
wants to enable others to tune into no individual teaching alone, but to the voice within.
Both have clocked many hours in the tank.

If you come at the right time, you might be able to catch them before or after a float.

More About JS Turner Over 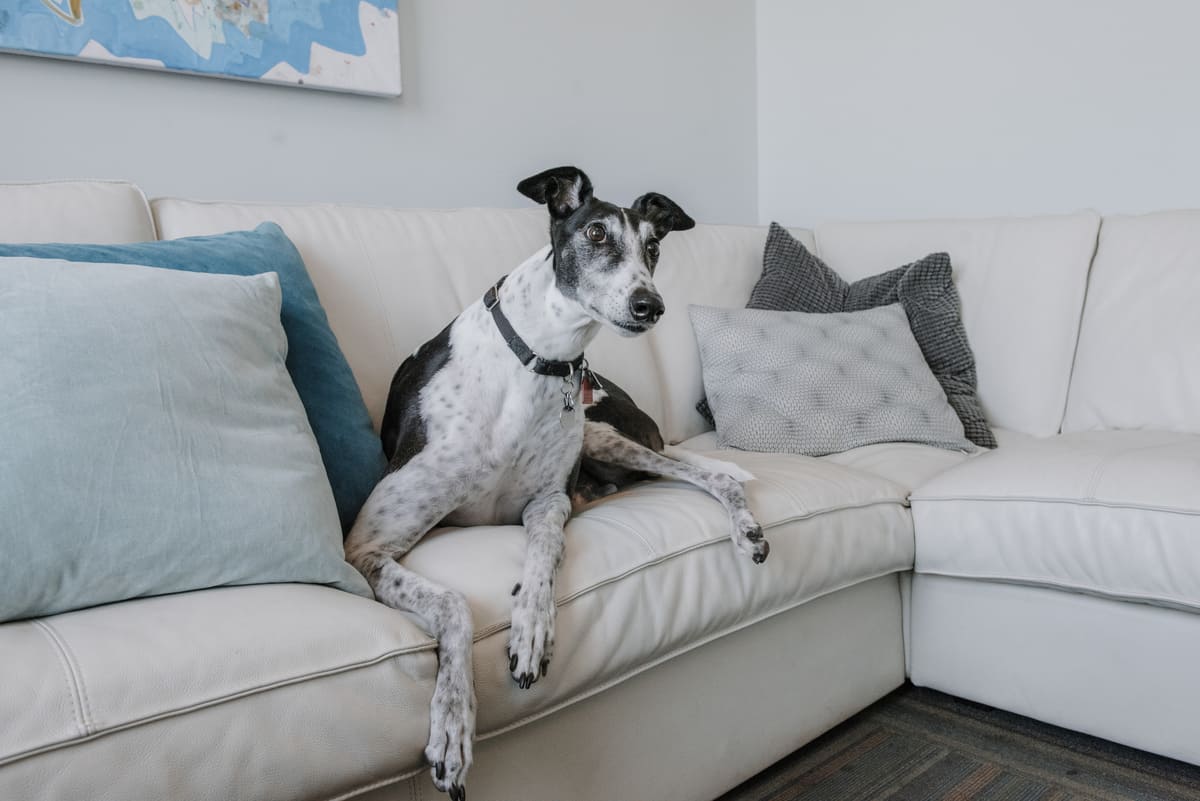 Turner is a retired racer with a sense for directing love wherever it is needed. Floating is based on the concept that talking doesn’t always get to the root of our dissatisfaction in life - and sometimes humans can’t help very much. Turner goes places that Brooks and Amy cannot in offering the unbiased and loving compassion that is unique to him.
Clients are encouraged to pet, snuggle or just sit with Turner as needed. He is one of the many reasons that OmFLOAT is so special.

OmFLOAT was founded on the principle that self-inquiry leads to higher consciousness and can, therefore, benefit the planet through our individual work on ourselves. This inevitably leads to a greater sense of spirituality in clients that is entirely unique to them. OmFLOAT aims to hold space for an inclusive and illuminating environment.

In 2021, OmFLOAT welcomed Ken to the family. He is an extremely unique Intuitive Healer local to Ashburn, VA.

He has stayed true to his personal vision while growing into his life purpose. Drawing from a wide variety of metaphysical practices, when you meet him, his insight becomes apparent immediately. As he explains, he feels divinely led.

Ken is a familiar face around OmFLOAT - he also helps with operations. Feel free to stop in and say hello when he is not prepping the tanks for floaters. Don't be surprised to come to a realization or two when you experience his unique way of being.

"I don't dwell on what's wrong. I'm present and focused with the intent to build a better future. My hope is only ever to reveal the light within. I focus on transmutation."

Thank you! Your submission has been received!
Oops! Something went wrong while submitting the form.